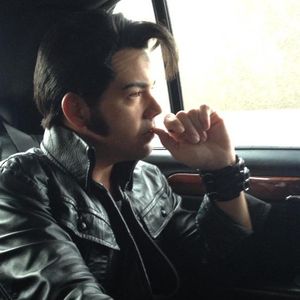 Some of David's accomplishments over the years are seen below:

David has appeared on Good Day Fox 4 Dallas and was featured in the Mesquite Star Local Newspaper. He also appeared on numerous radio and TV shows during his tenure at Legends In Concert; Myrtle Beach, SC.

David has a great passion for enriching his tribute to Elvis so that he may provide top-notch performances for Elvis' fans every time. David has honed his craft of performing Elvis’ 50’s start-up career, his movie years, the ’68 comeback special, and the concert years. As part of David's shows, he enjoys educating his audience about Elvis. “I like to teach my audience things that they may not know about Elvis or that they would be surprised to know."  From the hand gestures, to the quivering lip, to the swiveling hips, and of course the powerful voice, David rocks the socks off of his audience and keeps them begging for more. David’s fans have dubbed him the “Prince of Rock ‘n’ Roll.” “In each one of my performances, I like to stay as authentic as possible. I like to make sure that I do the moves the way he did them, lift my lip the way he did."

David considers being an ETA an honor and a privilege. “We carry on a memory of someone that people looked up to and still do."  David vows to humbly perform his tribute as long as he is physically able.